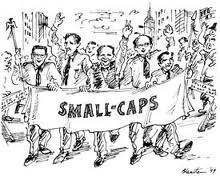 Micro-Cap Market Report: August 12, 2013 – As we have mentioned several times recently, August has a well-deserve reputation for being a trying month for the bulls. That was certainly the case in the just-completed week as U.S. stocks, micro-caps and big ones too, languished through their worst weekly performance since June.

The S&P 500 lost 1.1% for the week while the Dow Jones Industrial dropped 1.5%. The NASDAQ Composite was good by comparison, though that is not saying much, with a loss of less than one percent.

Part of the reason for the declines may be frothy valuations. The S&P 500 trades at 15.3 projected earnings, up from a multiple of 13.1 at the beginning of this year, according to Bloomberg.

Micro-caps a little give back to “Old Mr. Market”

Not surprisingly, it was a rough week for micro-caps as risk appetite waned a bit. The iShares Russell Microcap ETF (NYSE: IWC) lost 1.7% while the Guggenheim Wilshire Micro-Cap ETF (NYSE: WMCR) shed 1.9%. Both indexes are still flashing some gaudy numbers for the year… up 25.90% and 29.17% respectively.

With an improving economy, investors are more willing to take on risk… and so far they have been rewarded. Additionally, many of these smaller companies become acquisition targets for the big guys who are finding it hard to growth at a rate to satisfy Wall Street. Therefore, they look to power revenues and to some extend earnings, thru targeted acquisitions… which also has the effect of boosting many of these smaller companies’ stock price.

In economic news, the U.S. Labor Department said initial claims for jobless benefits rose by 5,000 last week to 333,000. The less volatile four-week moving average dropped to 335,500, the lowest level since the fourth quarter of 2007.

On Monday, the Institute for Supply Management said its services index climbed to 56 in July from 52.2 in June. Economists expected a July reading of 53. The new orders index rose to 57.7 from 50.8, but the employment index fell to 53.2 from 54.7.

Clearly, it was a light week in terms of economic data, but it was not light regarding fears of Federal Reserve tapering. Several members of the central bank publicly made comments during the week that the Fed should move to taper its quantitative easing program if U.S. economic data continues to firm.

This poses a troubling scenario.

Stocks and other riskier assets have adversely reacted to tapering chatter and the market does not seem quite comfortable with such a notion although tapering is a “when, not if” proposition. Additionally, bad economic news, though it would reduce tapering talk, could weigh on stocks, too.

No need to re-hash what we already know… just look at the red numbers on the chart.

While there are a few more weeks left in August, the broader market is looking poised for a pullback.

That does not mean investors should ignore micro-caps. Actually, the opposite is true. This is an excellent time to embrace lower beta sectors such as consumer staples and health care.

In terms of precious metals miners, guessing what the next move for this group will be has become fool’s gold, no pun intended. That said, there are some favorable opportunities with miners that are more focused on platinum and palladium than gold and silver.

Oil and gas names look lethargic. However, the same cannot be said of financials and consumer discretionary micro-caps, the current pick of the litter among micro-cap sectors.